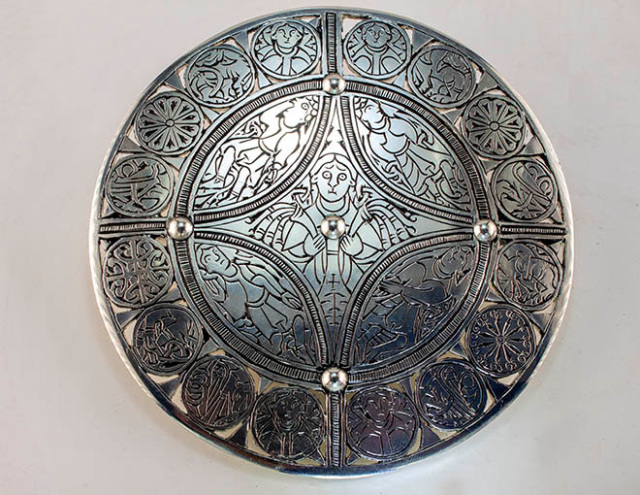 A large late 9th century, Saxon disc brooch, decorated in the Trewhiddle style. The original is in the British Museum. This is their description of the piece.

The decorative scheme consists of personifications of the Five Senses in the central roundel, surrounded by the open-work zone of smaller roundels containing alternating geometric animal and human motifs symbolising the different aspects of Creation in a not-quite-symmetrical arrangement.

The large central field is occupied by a three-quarter length personification of Sight, with large oval eyes. In each hand he holds a drooping foliate spray with double nicked details; above his head is a three-staged leaf, and on either side of it a triquetra. The points of the lozenge, each with a domed rivet, touch the border of the circular field, creating four lenticular panels, each with a full-length human figure depicting one of the other Senses. They wear short jackets and belted tunics. Any background space remaining is filled with an assortment of foliate scrolls or interlace.

In the upper left panel is Taste, with one hand in his mouth, the other holding a foliate stem, while profiled Smell, in the top right, is flanked by two plants, and has his hands behind his back. Touch, in the bottom right panel, places his hands together, and Hearing, in the bottom left, appears to be running, and cupping his hand to his ear.

The original is inlayed with Nielo. I have used a black oxide instead. The piece is 11.5cm and available only in silver.