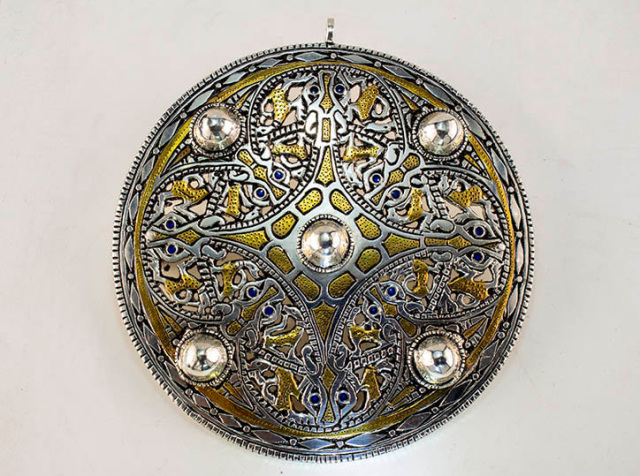 Slightly convex bossed disc brooch of sheet silver decorated with gilding and black acrylic (to simulate the niello on the original).

The zoomorphic decoration is deeply carved and pierced to give an open-work effect. Within the beaded rim, a zone of alternate disc and lozenge patterns contains the main decorative field, which consists of a central hollow-sided cruciform design with a boss at its centre and animal-head terminals, with a quatrefoil, the cusps of which terminate in identical animal heads: all the heads are set with blue resin to simulate glass eyes of the original. This in turn creates subsidiary fields each containing a puppy-like Trewhiddle-style beast. Four more bosses lie towards the perimeter, behind the animal-heads on the quatrefoils. considerable use is made of speckling and beaded framing. A suspension or keeper loop is attached to one edge of the brooch, at right angles to the direction of the pin catch.

The brooch measures just over 11cm and is only available in silver with gold platied areas.