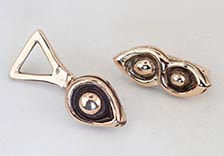 A button and loop, fastener set, based on finds from Yorkshire. Dated to the first century and made of bronze.

Many of these have been found in the UK and are thought to be dress fasteners, belt fittings and horse harness fittings. As there is no evidence for standard buckles in Britain before the Roman invasion, it seems fair to assume these could be used for belts.

This set is fairly large and chunky and works well as a belt.

A suggested setup for a belt is pictured.