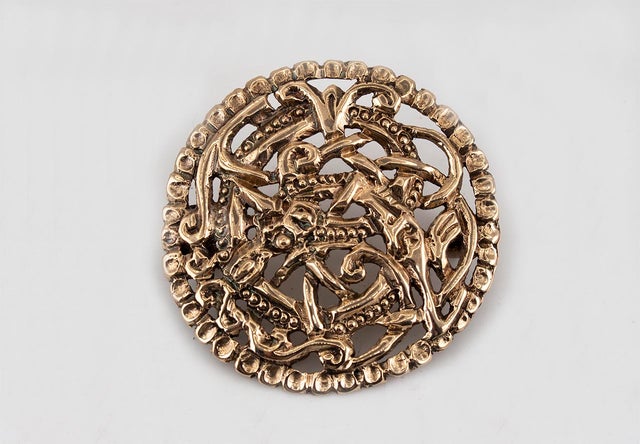 Copy of the 11th century, Pitney brooch, from the British museum.

Dished , disc brooch, Urnes style. Within a scalloped border, the convex surface of the circular brooch bears an openwork design of a coiled, ribbon animal in combat with a snake. The head has a pronounced lentoid eye, and an S-shaped lappet on the upper jaw; a second lappet projects from the neck. The creature bites its own body, which is composed of a plain and a beaded band, forming a heart-shaped loop. It has spiral hips; the sharply angled foreleg terminates in a three-toed foot and the hind-leg divides into two tendrils, the longer one interlacing with the body to terminate in a foliate trefoil. A snake's head with two prominent eyes, seen from above, bites the animal's neck. Its thin body, with one tendril offshoot, interlaces with that of the animal, and ends in two scrolled tendrils.

Available in Bronze, Gilded bronze and Silver. Measures just under 4cm across.